In the early 1980s discussions around the first genetically modified (transgenic) mice in the USA, jokes abound.

Animal research is fraught with controversy, and dramatic debates around the use of animals in biomedical sciences keep flaring up. As historians on the Animal Research Nexus team, we trace those public controversies, particularly the ones leading up to the UK 1986 Animals (Scientific Procedures) Act. But not all of our sources are serious – some involve surprising levity. In particular, in the early 1980s discussions around the first genetically modified (transgenic) mice in the USA, jokes abound.

Transgenic mice were first announced to the world in 1980, by Frank Ruddle’s Yale group at a scientific conference, and the front page of the New York Times. These animals, it would seem, represented a pinnacle of fears around genetic engineering that raged in the 1970s and involved moratoria on the use of recombinant DNA techniques and strict guidelines from the NIH that were gradually relaxed. For the first times, foreign genes were introduced into a mammal. Yet while there were a few concerned voices, most journalists reported the experiment as a major breakthrough with promises for gene therapy. The timing was fortunate – by 1980, most science writers shied away from the emotive coverage of the 1970s, and other issues caused concern, especially what fledging biotech companies were getting up to. Academic research, presented in cautious terms as a ‘first step’ by the scientists, raised few eyebrows.

These jokes weren’t just clever asides, they defused potential controversy. They are a reminder that context matters for controversies, and there are periods of relative relaxation.

After the Yale announcement, five other groups reported successes with genetic modification of mice within a year. The most dramatic news, however, followed in 1982, when the teams at Universities of Pennsylvania and Washington, led by Ralph Brinster and Richard Palmiter, inserted rat growth hormone genes into mouse embryos, leading to giant ‘supermice’, as the press quickly dubbed them. Supermice appeared on the cover of Nature and their images circulated widely in newspapers, magazines and on television, to the extent that they are often retrospectively (and inaccurately) identified as the first transgenics. What they did demonstrate clearly was the power of genetic engineering to transform mammals. As the OncoMouse co-inventor Philip Leder remarked in 1989, ‘It was... this uncanny evidence of functional expression, that made us sit up and realize that transgenics was more than just some technological stunt.’

Newspapers and television shows did not see the giant mice in such serious terms. Many envisioned bigger farm animals with bigger yields, and some raised ethical issues. But editorials in the Washington Post and the New York Times made tongue-in-cheek remarks about the new need for bigger mousetraps, or perhaps bigger cats. Introducing the report from Philadelphia on the evening news, the CBS anchor remarked, ‘however you feel about mice, you probably think they’re big enough.’ To Palmiter’s delight, the story was also picked up by the legendary comedian Johnny Carson on NBC’s The Tonight Show. In Carson’s monologue, full of incredulity over anyone wanting bigger mice, ‘one mouse kicked out the door to the lab and said, “I want a cheeseburger and I want it now!”’

These jokes weren’t just clever asides, they defused potential controversy. They are a reminder that context matters for controversies, and there are periods of relative relaxation. Moreover, culturally, in the postwar US and elsewhere, lab mice have been seen as a ‘safe’ species, given their long history of service to science (mice entered genetic laboratories in the 1900s). That safety allowed science commentators to use them as a way to imagine a possible future, be it in farm animals or gene therapy, without causing much alarm. The social theorist and human-animal scholar Donna Haraway described transgenic mice as ‘simultaneously research models, cultural metaphors, and potent jokes – jokes with the power to remake worlds and the subjects that inhabit them.’ Subverting expectations and the anticipated trajectories of debate, supermice and their transgenic kin embedded themselves in laboratories, scientific imagination, and the burgeoning biotech industry. 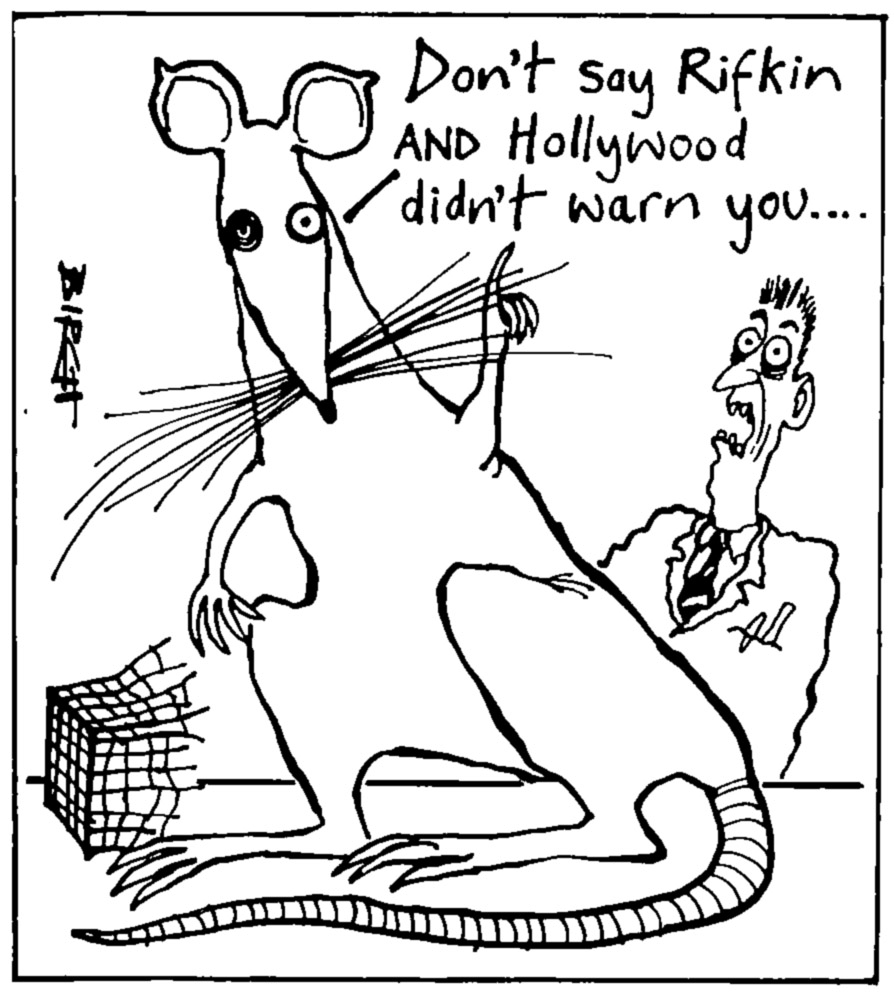 Jeremy Rifkin is an anti-GM activist. Image from Nature, 11 October 1984