Talking about the history of animal research can be tricky: the subject remains divisive, and using images poses further challenges. Scientific photographs of procedures can be very upsetting; antivivisection materials, often designed to confront their readers, might prove even more difficult. Yet images are an important source of historical evidence, and have played key roles in communicating animal research to diverse audiences, and occasionally in seeding controversy. While divisive subject matter is central, it is often insufficient to cause a strong response. Other factors need to come together, both in terms of context and how the story circulates in various media. This was the case with the image of ‘smoking beagles’ – perhaps the most famous and persistent image in the history of British animal research debates. The photograph is reproduced at the bottom of this post.

The image was taken in 1975 during an undercover journalist investigation by Mary Beith for the People, a left-leaning Manchester newspaper. Beith managed to get a job at the Imperial Chemical Industries (ICI) Alderley Park facility in Cheshire, near her home in Macclesfield, and brought in a small undercover camera. Early attempts were not successful – Beith apparently covered the lens with her finger – but eventually, with a larger camera, she got the famous shot. The image appeared on the front page of a Sunday issue on 26 January 1975, and caused strong reaction.

Several factors aligned to make smoking beagles a major controversy. The experiments were designed to test a safer cigarette with a synthetic tobacco alternative – it was therefore easy to argue these were frivolous, commercially-driven, and not, strictly speaking, done for medical purposes. The fact that dogs were used, and of a charismatic breed, fuelled discontent further. Beagles were chosen because they were easy to keep in packs and for their docility. According to ICI, the animals were happy enough to inhale smoke, presumably because of their addiction to nicotine, but the dog in the foreground on the left of the image appears reluctant to participate in the experiment. There was also something bizarre – almost surreal – about dogs smoking. The image may have led some readers to think of the pop ephemera involving smoking dogs, such as C. M. Coolidge’s Dogs Playing Poker series – but the clash with the serious subject matter produced an uncanny effect. Finally, unlike some distressing images recruited in antivivisection campaigns, the photograph did not depict any gore or surgical procedures. It could therefore circulate widely – more shocking content would have faced more barriers to being reproduced.

The smoking beagles story gave major boost to antivivisection groups in Britain, but it also owed its prominence to the increasingly vocal and organised opposition to animal research. In the 1970s, activists launched public campaigns and engaged with political parties and establishment, and they were becoming more media-savvy. Richard Ryder, psychologist and author who coined the term speciesism (by analogy with racism and sexism), was active in the RSPCA and moving it towards a more outspoken position on a number of issues, including animal experiments. In fact, as his archival correspondence shows, it was Ryder who had recommended ICI facilities as potential sites for an exposé to Alan Ridout, another journalist at the People who had been looking for stories involving laboratory animals. Ryder’s book-length critique of animal experiments, Victims of Science, was published a few weeks after the beagle images and fuelled further stories.

There were sustained protests outside ICI buildings, and multiple questions asked in Parliament. Over 200 MPs signed an early-day motion to ban the experiments. Lady Parker, the widow of the Lord Chief Justice, volunteered herself as a smoking research subject to replace the animals. The response from ICI and medical authorities – arguing that the experiments were necessary and that the beagles were not in pain and in fact enjoyed the process – received little sympathy in the press. After a few weeks, Roy Jenkins, then Home Secretary, promised to put an end to similar tests in the future, but the original experimental programme was allowed to conclude over the next few years. In the summer of 1975, there was a break in to ICI, and two beagles were taken by activists, an early example of direct action by the Animal Liberation Front that attracted further attention to the case. In December 1975, a report from the Home Office Advisory Committee recommended banning the use of cats or dogs in any further research on tobacco substitutes, but found no wrongdoing or poor conditions at ICI. By that time, however, the effects of the image had rendered the particulars of the experiments largely irrelevant.

The smoking beagle story was a landmark in subsequent conversations about animal experiments in Britain. It challenged the automatic appeal to medical benefits of animal testing, and boosted demands for stronger justifications for using animals in science. It gave momentum to the political campaign for legislative reform – supported by many scientific organisations, too. In my research with the Home Office papers in the National Archives, the beagles came up routinely in discussions leading up to the Animals (Scientific Procedures) Act 1986, which came to replace the 1876 Cruelty to Animals Act that had regulated experiments for over a century.

Since the 1970s, undercover exposés and whistleblowing cases have been a steady feature in antivivisection campaigns. The smoking beagle image has, however, persisted in the public imagination of animal experimentation in Britain. In her work with the Mass Observation Archive, my AnNex colleague Renelle McGlacken has found that the photograph still springs to mind when it comes to animal research – many Observers have registered its emotional impact, even if few remember the details of the experiments it depicted. The undercover image of the beagles – disturbing, but not enough to avert the gaze – has had a lasting effect. 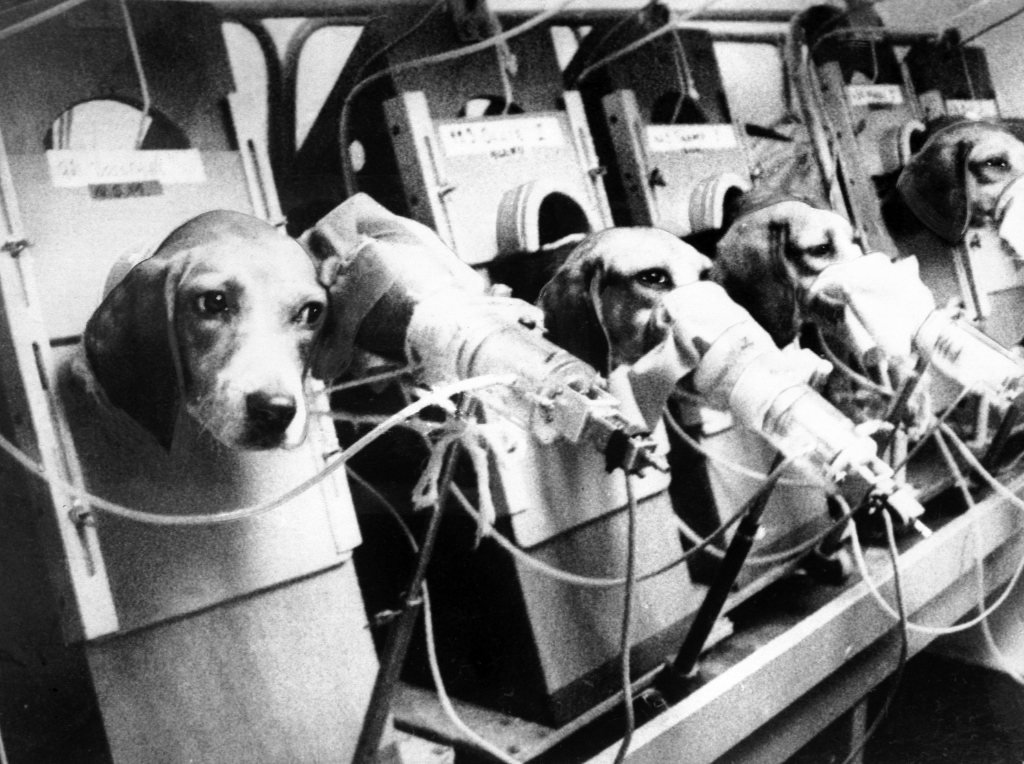 Authors
Dmitriy Myelnikov
The smoking beagle story was a landmark in subsequent conversations about animal experiments in Britain. It questioned the automatic appeal to medical benefits of animal testing, and boosted demands for stronger justifications for using animals in science.
Project area
History & Cultures
Other tags
Animal Research in Public
Histories of Animal Research
Visual Cultures of Animal Research